Ocean City High School has had a string of impressive pitchers over the past decade and the string doesn’t figure to run out any time soon.

It started 10 seasons ago with Connor Ortolf and Kolya Stephenson.

It reached a new level with Sean Mooney, then Dan Nunan.

And Gannon Brady, Matt Nunan, Jake McKenna and Tom Finnegan are four pitchers who will be keeping things alive on the OCHS mound for the next three years.

The Raiders were 177-75 in 10 seasons under Craig Mensinger and Andrew Bristol, winning 20 NJSIAA Tournament games and a pair of South Jersey championships. It has been, by far, the most successful 10-year stretch in the history of Ocean City baseball.

Ortolf went on to start 35 games at Lafayette. Stephenson, a 50th round draft pick in 2011 by the Phillies, pitched for Alvernia and Stockton. Hall pitched in 12 games as a freshman at Georgetown then became an outfielder, scoring 105 runs, driving home 74 with a .360 on-base percentage in 192 games for the Hoyas. Altieri pitched three seasons for Hofstra and Arnold has seven wins and a 4.17 earned run average at Fairfield with one season to go.

Mooney pitched his last game for the Raiders in the Group 3 state final, accepting a scholarship to play at St. John’s, a commitment he had made early in his high school career. Mooney – who won 26 games at OCHS with a 1.13 ERA and 302 strikeouts (all school records) while also becoming the Raiders’ first player to get 100 career hits – also had impressive numbers at St. John’s.

He won 21 games with a 2.13 ERA in about two and one-half seasons before an injury required Tommy John surgery. He was All-Big East twice and was the conference Rookie of the Year in 2017, Big East Pitcher of the Year and a Freshman All-American. Despite the injury, he was drafted by the Minnesota Twins and is now in rehab after the surgery in Florida.

“The rehab is going well,” Mooney said over the weekend. “Arm is feeling good, though I’m having some trouble with my forearm. I will start throwing at the end of September.”

Dan Nunan was drafted by the Los Angeles Angels out of high school in 2018. In his senior year he was 5-0 with a 1.49 ERA and led the Cape-Atlantic League with 13.78 strikeouts per seven innings. He had been battling injuries since signing with the Angels but began pitching the middle of July. He is 1-1 with a 4.91 ERA for the Angels team in the Arizona Rookie League. In his strongest outing, he struck out four, walked nobody and gave up one hit in three and two-thirds innings against the Arizona White Sox.

“I’m feeling great,” Nunan said. “I’m glad to be healthy again. I’ve been working a lot on pitch development with my curveball and changeup this year. My body has definitely acclimated to the climate out here and I’m enjoying the experience.”

Lashley, who also scored the longest touchdown in OCHS history and set school records as a pass receiver, won six games as a senior with a 0.74 ERA and was seventh in the league in hitting with a .451 average. He also made a strong start for the Tri-Cape team in the Carpenter Cup Baseball Tournament in Philadelphia. He will do his pitching for Stony Brook (NY) University.

Campbell, who set a school record with a 0.66 ERA as a junior, had a 2.38 ERA as a senior and his bat made a lot of noise. He was second in the CAL in home runs and led the league in RBIs. His college baseball will be played at Frostburg (MD) State.

That leaves the four pitchers who still have a lot of high school innings left.

Finnegan was third in the CAL with a 0.82 ERA and led the league allowing an average of just 2.06 hits per seven innings. He committed to the University of Kentucky before the season began but when Jim Belanger, UK’s highly successful pitching coach, left for Florida State, Finnegan retracted his commitment. He then committed to Vanderbilt after also considering Florida State and Duke, among others.

Brady, whose 6-0 record on the mound this year was the best record in OCHS history, was also the winner of the Boo Pergament Memorial Award as the CAL’s most improved basketball player. He had a 1.24 ERA and fanned 34 in 34 innings. He is sorting through offers from the Ivy League.

And the 6-6 McKenna, who is about to start his senior year, had a 0.84 ERA last season and averaged more than two strikeouts per inning. He has offers from Rider, Iona, NJIT and Stony Brook, among others.

It has been a special 10 years for Ocean City High School baseball and, when you consider that Bristol could have four D1 pitchers in his rotation next year, it explains why he is always smiling. 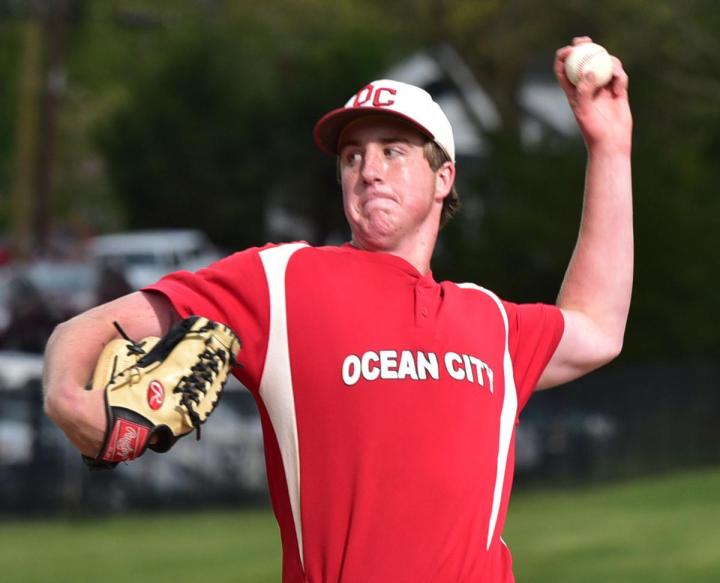